A weekend away in Bradford

Jim and I had a lovely weekend away in Bradford, where  I went to the Cloth & Memory 2 exhibition.  This was staged in Salt's Mill, Saltaire. Titus Salt built and ran the largest mill space in Britain in the Victorian era.  It was a vertical process mill, where the raw angora fibres were brought into the mill, in the attic space, and it was processed through various stages before emerging on the ground floor as fully finished woollen cloth.

Lesley Millar said artists had been invited to respond to the space, and consider Cloth & Memory in relation to the spinning room at Salts Mill.  My favourite pieces were:

Peta Jacobs, Shadows of distinction.  A 6m x 2.5m screen printed piece of cotton silk devore.  The devore had destroyed the weft fibres so the imagery was apparent by the areas hanging in shreds.  The image was taken from a 1952 photo of wool merchants outside the Bradford Wool Exchange - middle aged men, the picture of affluence, prior to the collapse of the wool industry 5 years later  The devore piece was hung behind a sheet of calico and illuminated from behind, so it was the shadow that produced the image.  A really ghostly image.


Caren Garfen, Reel Lives.  Caren Garfen had researched the names of all the workers at Salts Mill in 1891, from the Census, the recorded the details of these women on tiny "blue plaques" on the  end of cotton reels, representing the bobbins at the mill.  Each reel had a ribbon extending from it, detailing their address, and maybe a comment on the role of women in the mill.  When Jim and I walked around the mill, we saw a lot of the addresses within 100m of the mill.  Apparently Titus Salt was a philanthropist who built a model village immediately alongside the mill, to provide housing for his workers.  While I suspect the women were very low paid, a tied cottage probably improved their lot. Caren Garfen had obviously done a huge amount of research to support her work, and it was wonderfully worked in meticulous detail.


Caroline Bartlett had done 14 large embroidery hoops with woollen fabric embroidered with a fabric manipulation process, with a ceramic piece in the centre of each one, that was embossed with the imprint of the process eg smocking.  It was absolutely wonderful.  This represented home, work and domestic life.  The hoop represented domestic and environment of the mill.  Lesley Millar said that in her opinion Caroline had produced her life's best work with this piece. 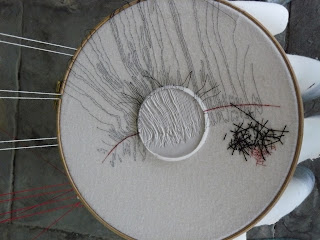 At the seminar afterwards, Maxine Bristow had some interesting things to say:

Too much material awareness holds back the significance of textile work.
Work needs to be accessible.  You need to be able to convey what is in your head - otherwise the audience may not get it.
Space between objects can be as powerful as the work (Salts Mill is absolutely huge)
You need to be clear about the difference between memory/remembrance/memorial and what your work is targetting.
Textile writing can be a liberation/harness.  Maxine Bristow writes for herself, although her blog (Through the Surface) is public and has been cited on MA courses as a recommended text.  She uses her writing to engage her thoughts and inform her making.  Critics usually limit themselves to writing and critiquing, and do not make as well. (I really get this!).  She finds writing makes tangible the intangible.  Writing forces thinking.  Writing a proposal  forces the making to evolve and become tangible.  The practice of writing validates making process.  Journalling gave a framework to chunter and resolve.  Thinking occurs.  Space  for possibilities.  However there is a conflict between writing seriously and writing clearly.  Serious writing should also be clear, although serious writing often excludes.  This is the challenge of being a worthy writer - to write inclusively and clearly.

This was a lovely weekend, and most thought provoking.
Posted by Cathy MacTaggart at 10:47

Cathy MacTaggart
I'm a contemporary artist, having recently completed my Masters by Research at Coventry University. I am interested in how society values people who carry out mundane or manual roles - often tasks that are essential but low status or low paid/unpaid. My Masters By Research: Stitching (In)Significant Women, created 5 samplers and a body of artwork about 5 working class women, known to me. My next body of artwork is about the workers at my local quarry - working class men in a tough manual industry.